History of Harmon Field (from the 1926 MHS Yearbook) 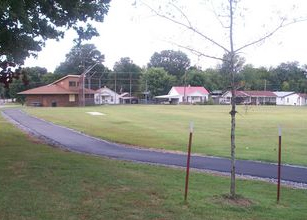 Harmon Field
In 1923 Martin had been using a field known as Glass Field, which had been secured by McFerrin School, which was a private school. At that time Hall-Moody Junior College and Martin High School did not have athletics of any kind, although the two schools represented a student body of about 1,000. In the meantime McFerrin School was discontinued, and the growth of the town caused several attempts to sell off the field into building lots.

Then came the announcement in the summer of 1923 that William E. Harmon of New York would give $100,000 for playgrounds in the United States to be divided among 50 towns. Martin entered the contest and although over 800 towns were in the contest, Martin was successful in receiving an award of $2,000 from the Harmon Foundation and was one of the fifty-three towns receiving such awards. Our award was announced December, 1924; however, problems in deeding the land prevented the actual purchase of the field until May, 1925. The City of Martin appropriated $1,635, which, together with the Harmon award, purchased the field. Then in the meantime sixteen business men signed notes for $800.00 and purchased seventy-five feet additional land north of the field, thus making Harmon Field 384x528 feet with a street on all four sides. All of this land was deeded to the Harmon Foundation who in turn deeded it back to the City of Martin and dedicated the field to outdoor play forever. It is permanently set aside and thus Martin has obtained her athletic field and playground.

Without the aid of the Harmon Foundation Martin would be without an athletic field today, and the increased activity in athletics of every description has certainly proved the great good done by Mr. William E. Harmon of New York, whose name is foremost in the minds of all young people in Martin. A number of improvements to the field will be made during the summer, among which are complete equipment for field and track meets and the erection of grandstands, dressing rooms, etc.

The Harmon Foundation was established in 1922 by wealthy real-estate developer and philanthropist William Elmer Harmon of New York City.  It originally supported a variety of causes, including playgrounds and nursing programs.

The William E. Harmon Foundation award for Distinguished Achievement among Negroes was a philanthropic and cultural award created in 1926 and administered by the Harmon Foundation. It was offered for distinguished achievements in eight different fields: literature, music, fine arts, business and industry, science and innovation, education, religious service, and race relations. It is best known for its recognition of African-American art of the Harlem Renaissance, particularly the visual arts and serving as a large-scale patron of African-American art that helped gain recognition for those artists who otherwise would have remained largely unknown.

But who was William E. Harmon? (compiled from Warren County Local by Dallas Bogan, 2004)

When William was about twenty, his father’s financial difficulties interrupted William’s medical schooling. His 1883 marriage to Corrine Lado ended in her tragic death during childbirth.  His mother also died in 1884 and his father succumbed a year later. The misfortunes of the family set heavily on him for he had no professional job stability and a minor brother to care for.

Within a few years, both William and his brother Clifford worked with their uncle, Charles E. Wood, in the real estate business. Their first joint undertaking was the development of a subdivision in Lebanon. Expanding to Cincinnati and Dayton proved to be a successful and prosperous move, as did further expansion to twenty-six Midwestern cities. By 1900, The Wood, Harmon Company was acclaimed the largest real estate operation in the world.

Mr. Harmon retired at the age of sixty from active work in his New York real estate business and devoted the rest of his life to the solution of social problems. It was at this point, about 1922, that he established the Harmon Foundation.

Harmon Park, a tract of 88 acres in his hometown of Lebanon, Ohio, was given to the citizens of Lebanon in 1912. The park was so well received that a national program, Harmon Playgrounds, was established. By 1926, one hundred and nineteen facilities were established in thirty- two states. Martin’s Harmon Field is one of these!

And in case you are wondering, the four streets bordering Harmon Field are Olney Street on the North, Cleveland Street on the West, North College Street on the East and Jackson Street on the South.  Many memories are connected to Harmon Field!
In Memory and Appreciation of
William Elmer Harmon
3/25/1862 – 7/16/1928
Moravian Cemetery
New Dorp, Richmond County, New York